The Country Park has been established on the site of a former gravel quarry. The quarry was worked from after the Second World War until 1980. Since gravel extraction stopped the Park has been carefully managed, initially by Bedfordshire County Council and more recently by Bedford Borough Council.

The Park is made up of a number of habitats that include:

The Nature Reserve
Willows and sallows have established in the wet and damp areas and ash, hazel and oak on the drier ridges. Parts of these woodland areas are managed by coppicing - cutting the tree at ground level. This encourages the tree to grow many new shoots which are important to wildlife. The cut material can be used for crafts such as basket weaving, hurdle making and hedge laying.

Some parts of the woodland are seasonally flooded and so have a sparse but specialised ground flora and fauna. Such areas are rare in Bedfordshire.

Damp open areas are dominated by common reed, with meadow grasses and flowers growing in the drier areas. A variety of butterflies and moths inhabit the reserve and an assortment of orchids can be found in spring and summer.

The pond (which was created by the Friends of the Park) is home to great diving beetles, newts and dragonflies. Water soldier, an introduced species, also thrives there and has to be managed to keep open water. Kingfisher, Snipe, Moorhen and Coot can also be found near the pond and several species of warbler nest here, making use of the combined wood/reed habitat.

The Rabbit Warren
During the gravel extraction period this open area was used for gravel washing, stock-piling and loading. It was levelled as part of the restoration. It now has a slightly domed contour and has a free draining middle with damper edges, where the finer material is found. The surface is very mobile and grass is surprisingly sparse. Similar areas can be found in some parts of the coast and in the Brecklands of Norfolk. This habitat is rare and fragile, particularly in Bedfordshire, and is very important for plants and invertebrates.

In wet seasons, lichens and mosses bind and stabilise the surface. In drier times, these plants form a crust that is very easily broken up. The loose unstable soil is the true habitat for many 'weed' species - Ragwort, Thistle, Teasel and Willow-herb flourish, as do nettles in the higher nutrient areas.

The whole area has been colonised by rabbits that dig significant warrens. With easy digging, some of these holes have been enlarged and used by foxes and badgers for short periods. The ground above these burrows sometimes collapses leaving rutted ground. Please take care on the uneven ground when exploring this area.

Solitary bees, wasps and ants colonise the warm and dry bare areas and beetles are also common here. Watch out for Green Woodpecker, Fieldfares and other birds searching the ground for food. Sparrowhawk and Merlin hunt here and use the warm and loose sand for dust bathing and 'anting'. A surprising find can be mussel shells, which have been brought into this area by predators from the river.

There are a range of orchid species in areas where their specialist requirements exist. They are easily overlooked, as is the tiny Whitlow Grass (actually a member of the cabbage family). Scrub is beginning to encroach this area and ash, bramble, hawthorn, willow and elder are kept at bay by brush cutting and rabbits grazing.

The Silt Lake
This is located towards the Odell end of the main bridleway through the park. It is situated adjacent to the large carving of otters. 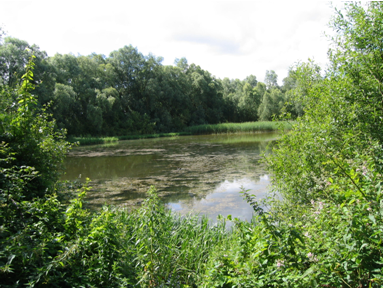 The view in the picture would once have been a common sight in medieval times, before the landscape was cleared to provide meadows for grazing and hay cropping. The lake was originally formed when water ran off from the sand and gravel washing plant that once stood near the top car park. This process continues but with natural ground water containing silt. This is gradually filling up the lake.

The shallow body of water is edged by the common reed Phragmite. There are also small areas of Typha, which is the bulrush that features in the story of Moses. Ahead of you, the land grades into the drier woodland that forms the Nature Reserve. Here the common species are various species of willow and alder, which colonised the damp areas first, followed by alder and ash, with oak being the most recent coloniser in the drier areas. The Reserve is frequently flooded with often a foot or so of water.

The vegetation in this area is developing in a similar way to the fens and carr (fen woodland dominated by species such as willow, alder or birch) of East Anglia. Peat accumulation is less here at the moment but eventually this lake will silt up; vegetation will colonise it and a classic fen, then carr community will become established.

The picture below shows the site as it was before quarrying ended in the 1980s. Excess water from the washing process travelled towards the top of the picture and into what is now the Silt Lake. Here it was allowed to stand so that the silt could settle out, leaving clear water to drain into the river. Natural ground water continues to follow the same course and the silt it deposits is gradually filling up the lake. 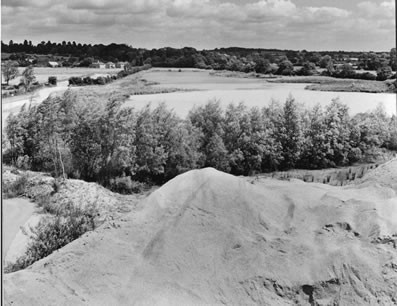 Today, the common plants of the lake edge are: Hemp Agrimony, Marsh Bedstraw, Marsh Thistle, Wild Angelica, Water Mint and Purple Loosestrife. In the drier areas, there are Nettles, Cleavers and Great Willowherb. The tall invasive alien herb Orange Balsam is also to be found. Phragmites will persevere in the drier areas but are superseded by sedges and meadow grass (Deschampsia).

In summer, Water Rail, Reed Warblers and Blue Tits can be found in the reeds. Mallard, Coot and Moorhen have been seen regularly; a resident pair of Mute Swans nest here annually and the odd Kingfisher can be observed. In winter bad weather brings other duck species which will ride out storms on the lake. Bittern and Bearded Tits have been noted but really need a more developed habitat. Tufted Duck pass through most times of the year – often from the larger lake in the park.

This is a landscape in transition! Cutting the reeds will help slow this process down but it is Park policy to let this area develop naturally. At the moment it will still hold water in times of flood.

1. Start your exploration of the River Meadows in the corner of the Main Car Park behind the information Board. You are standing in the valley of the River Great Ouse. It flows across the Fens to enter the North Sea through The Wash.

2. Enter the meadows via the kissing gate. Walk past the trees on your left until you reach open ground. This is the flood plain of the Ouse and, true to its name, it floods after heavy rain. 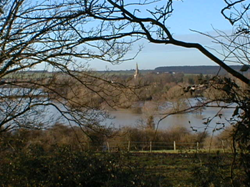 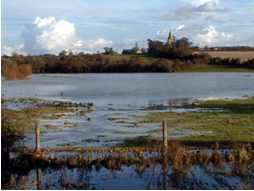 3. During the Ice Age, ice over 200 feet thick covered the spot where you are standing! The ice carved its way down the valley, creating the terrace you see to your right with Chellington Church standing on top of it. 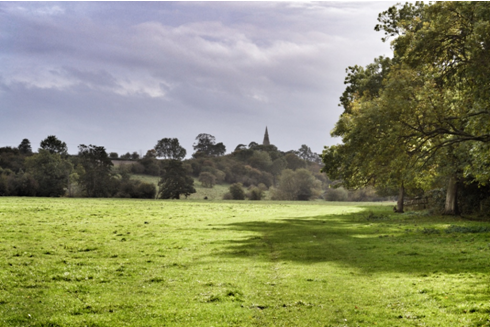 4. To your left is Kingfisher Lake. It was created by the quarrying that gave us the Country Park landscape.

5. Walk over to the bank of the lake. A shock can sometimes await visitors in the form of a dolls head or limbs appearing out of the sand. These are a reminder of the Harrold doll factory whose waste was dumped here.

6. It is worth crossing to the river bank. Following it downstream you will come to a hollow joining the river. Is it natural? Could it be the site of a fish pond or maybe a boathouse? Your guess is as good as anyone’s.

7. Follow the river bank and in various places you will find that the bank has collapsed and in places it reveals a horizontal ‘plough’ line which represents the depth to which the land was ploughed in years gone by.

8. Leave the meadows via one of two gates to your left that take you back into the Park.

The Shelter Belt
This is the name given to the strip of woodland that lies between the main body of the Park and Carlton Road. It was planted in the 1960s to ‘shelter’ the village of Harrold from the noise and visual effects of the quarrying operation in what was known as ‘Harrold Pit’. The quarrying operation extracted sand and gravel used, among other things, to build the new city of Milton Keynes. The operation resulted in a steady stream of heavy lorries transporting quarrying products through the local village. The disruption was serious! 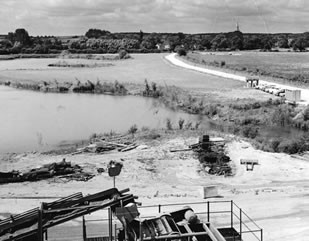 The picture above was taken from the site of the gravel washing plant (site of the Rabbit Warren) towards the future site of the Visitors’ Centre and the Shelter Belt, yet to be planted. It is dated 1962. The area was planted with Scots pine, poplar, Elm and Norwegian Maple sometime in the 60s or 70s. 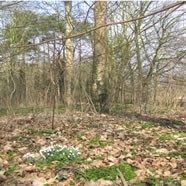 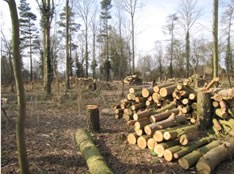 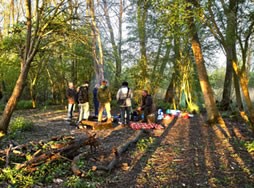 It remained largely unmanaged until a few years ago. Left in this state it would currently look like the top half of the picture on the right. The clearance was all done by Friends of the Park who work in the park as conservation volunteers.

With the area cleared and thinned, plants and trees now have light to develop and a five year bluebell planting project is in place. The logs taken from the area were cut and split by the volunteers and sold as firewood locally. Subsequently there has been some tree planting of native species.|

Today, the Shelter Belt provides a pleasant alternative section to the circular walk around Grebe Lake. It is an easily accessible area in which to observe the consequences and benefits of woodland management and conservation over the coming years.